Our website uses cookies to enhance your shopping experience. By continuing to use this site, you accept these our Cookie Policy.
More Info
Ok
20% Off New Arrivals with NEW20 T&Cs Apply
FREE WORLDWIDE SHIPPING MIN. SPEND APPLIES
Our Store Plan Your Visit 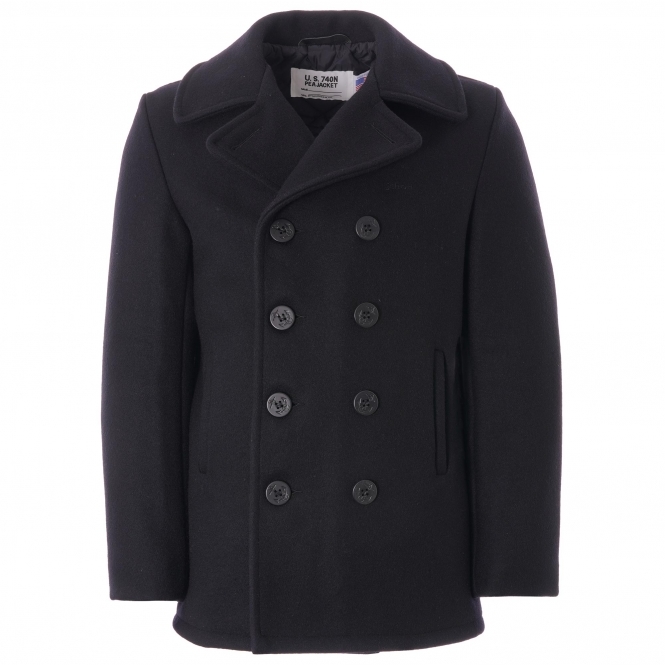 This Schott 740 peacoat in navy overs a truly luxurious coat. Not one detail was over looked when creating this jacket, from the military anchor buttons to the hand warmer pockets. The quilted lining ensures warmth and quality for this garment as well as the materials used for the outer layers. The Schott Peacoat has a history behind it, this is a great wardrobe staple to see you through the colder months.

The US Navy Peacoat was adopted during the early 20th Century, from Britain’s Royal Navy Reefer Jacket. The Royal Navy's first regulations for uniforms for other ranks were issued in 1857, a century after the regulations for officers and this garment was originally used by Midshipmen (Reefers). These crewmen had to climb the rigging and furl and unfurl, or ‘reef’, the sails of the sailing ships of the era. The jacket was short, to allow ease of movement through the rigging. It had a double-breasted front, which displaced the buttons to each side. This helped reduce the chance of them getting caught on ropes, as the wearer maneuvered the sails. The pockets were often close to vertical, and over the flanks, rather than horizontal and at wrist level. It was made of very heavy wool, in dark Navy blue, with a nap on the face side.

Write a review
Review Summary - 5 out of 5 based on 7 ratings.
Sort reviews by:
Schott NYC US 740N Pea Navy Jacket Colour: Navy, Size: 36

I bought my first Schott pea coat on a trip to New York in 2005, its lasted me until this year when it finally succumbed to the moths, still the best value coat I've ever bought. Stuarts were the only shop to have a size 36 in the UK, I'll be back in ten years for my next one...

This is a great jacket, there are many Pea Coat jackets you can choose from but none as iconic as this. It is made to last, and lined and padded for proper chilly conditions. Size wise I would go for your normal chest size.

Extremely pleased with purchase, authentic product at a very good price. DPD delivery process was excellent, well intimated with continual updates as to delivery time-scale and options. Will definitely buy from again.\nGreat example of e-commerce.\nRobert

Really well made and surprisingly rugged jacket. The quilted lining adds warmth and the outer pockets are great for keeping hands warm. Inside pockets are plenty big enough for wallet and phone. A good length too - I'm 6 feet 3 inches tall but the sleeve and jacket length are fine in the regular fitting. Very pleased with this purchase. Highly recommended.

Fast and hassle-free order and delivery process with Stuarts. The coat itself is unfussy, classy and warm, and with collar up looks smart as hell! I can wear just a t-shirt underneath even on frosty or windy days. BTW, order it from Stuarts in your actual chest size, (only buy + 1 size if planning to wear over a suit jacket), and you'll be sorted.

Excellent quality coat and the service equally excellent. Would certainly would purchase again from this company.

Place your order before 3pm BST (Monday - Friday) for same day dispatch. Orders after 3pm BST and weekend orders will be dispatched the next working day.

We have recently improved our delivery services for our international customers by partnering with Global-E. For delivery rates to your country please click Here

All sensitive and personal data are encoded and can only be read on a secure server to ensure the online safety of our customers. Multiple security checks are also made on all transactions, to ensure the authenticity of all payments. We accept payments of: Paypal, Sage Pay, Mastercard, American Express, Amazon Pay, Visa and Maestro. If you have any queries regarding our payment and security, you can get in touch with our customer service team here