English labels have long held a place at the forefront of Global fashion, with English brands renowned for their reliability and robust construction. Join us this St. Georges day as we explore three classic English brands from their founding to what they are today.

When thinking of Baracuta most people will immediately associate the brand with the Harrington jacket, a staple piece of outerwear in the classical man’s wardrobe. Founded in the northwestern city of Manchester, Baracuta was formed in 1937 by brothers John and Issac Miller. Today the brand is a successful and modern label synonymous with the Harrington jacket, but this has not always been the case for Baracuta. 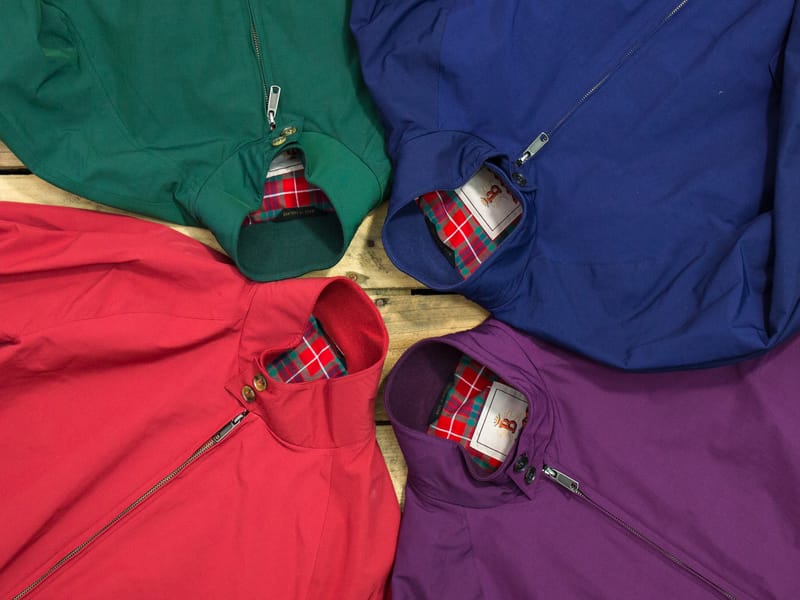 Beginning as a humble supplier at the height of Manchester’s cotton production, Baracuta’s original purpose involved producing raincoats for Burberry and Aqauscutum, however in the late 1930’s the Miller brothers decided to use their connections with the fashion elite to launch their company as an independent label. This decision eventually led to the inception of the famous Harrington G9 jacket which is still in production to this day. Baracuta as an independent label struggled to stay afloat for the first few years,  being plagued by low sales and a troubled marketing campaign. This all changed when the Harrington jacket was adopted by pop culture icons of the 50’s such as Elvis Presley and James Dean.

The Harrington G9 has been worn by everyone, from rock stars to US presidents to James Bond. Also referred to as windbreaker due to its extended collar, The Harrington G9 is a lightweight, casual jacket perfect for a brisk spring day. The Harrington G9 exploded in popularity after being worn by James Dean in the 1955 film “Rebel Without a Cause”, instantly propelling Baracuta into the limelight. 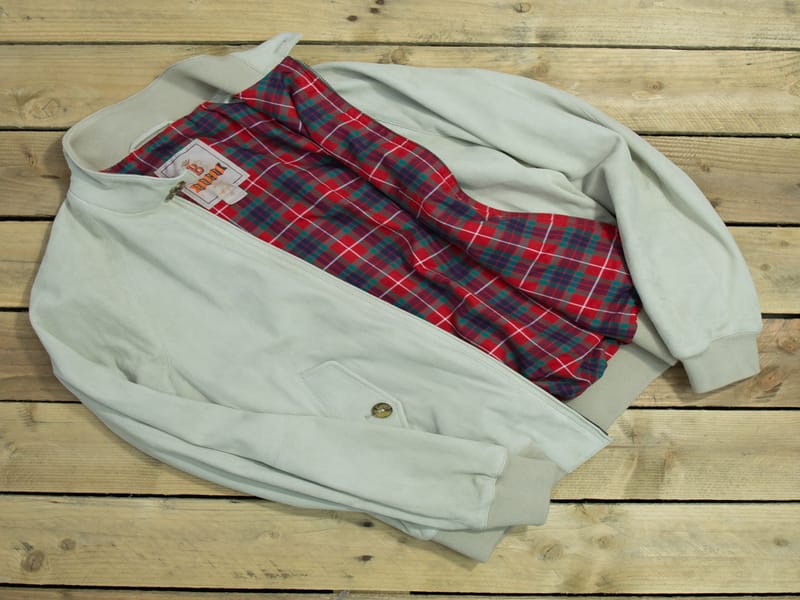 After the jackets originally exposure through james Dean every modern man of the 50’s had to have one. Other men’s style icons such as Frank Sinatra and Elvis Presley were soon seen donning the jacket, which cemented it as an instant classic. The jacket made recurring comebacks throughout the 60’s, 70’s and 80’s- most notably in the UK counterculture scene. In more recent years the famous jacket has been seen on President George Bush Jr and even Daniel Craig in the 2008 James Bond movie “Quantum of solace” proving the Harrington G9 a timeless staple in any modern man’s wardrobe.

check out our collection of Harrington jackets and other Baracuta products here.

Barbour are one of the most well known English menswear brands of all time, having been a mainstay in the English fashion scene for over seventy years. Founded over one hundred and twenty four years ago in 1894 by a Scottish man named John Barbour, the brand originally produced waterproofed wax jackets for fisherman plying their trade in the bitterly cold North Sea. Barbour remained a fairly unknown brand until 1908 when Barbour’s son Malcolm produced the first mail order catalogue for the company which catapulted the brand into the national and international market. So successful was this business move that by 1917 75% of Barbour’s business was from mail order items.

By 1936 Barbour had introduced its now famous motorcycling range as to compliment their already existing range of coats and jackets, this being the move that placed Barbour where it is today. 1940 was the year Barbour exploded domestically, with most top tier British racing teams having adopted the Barbour jacket and proudly wearing them at both domestic and international races. Barbour’s enormous success continued with the British navy adopting their jackets due to the unsatisfactory standard issue jackets provided to sailors, this only furthered Barbour’s reputation as a quality provider of weatherproof outerwear. 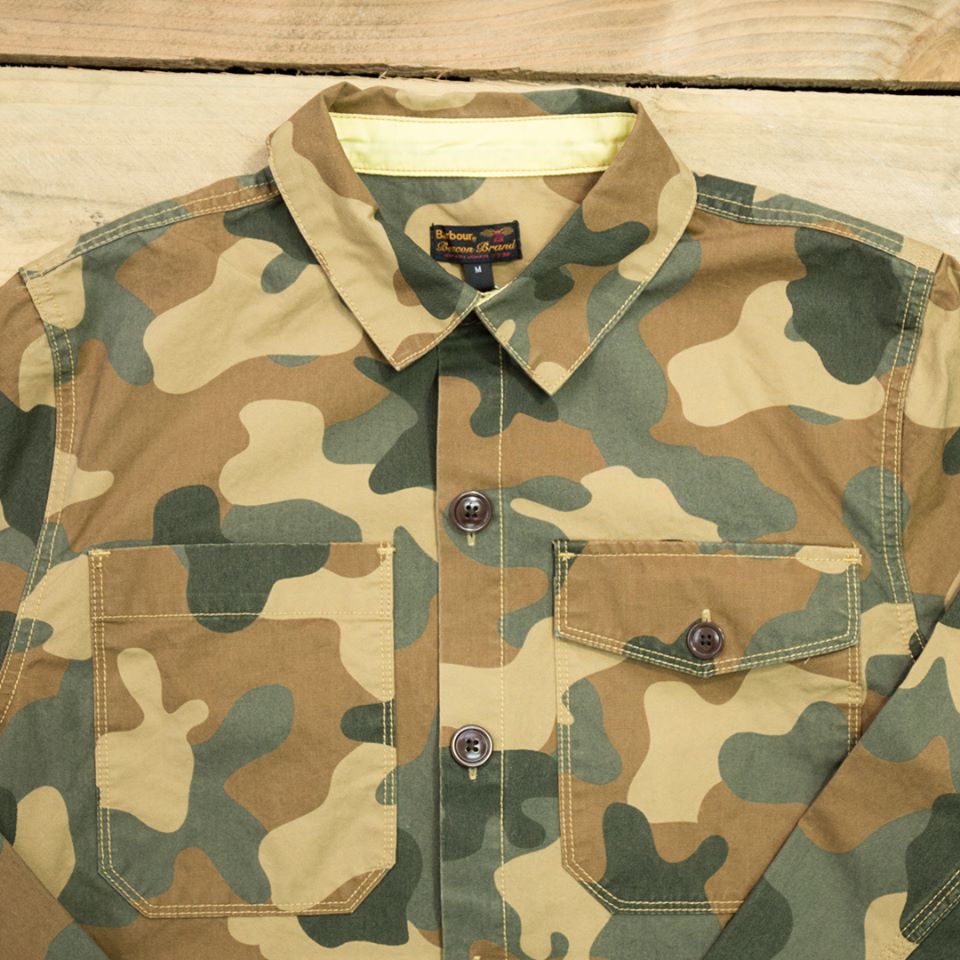 In 1964 actor Steve McQueen wore a Barbour International Suit for the International Six Day Trials races in East Germany, McQueen wearing Barbour showed the world that Barbour was now a fashion brand as well as a functional outdoor brand. Barbour continued to expand its fashion lines and throughout the 70’s and 80’s cemented itself as a brand to be worn by men of all walks of life. Barbour’s success continues to this day and it is still on the forefront of British menswear.

Check out our collection of Barbour products here.

Dr Martens is an English footwear brand which is today synonymous for the creation of the classic ankle boot and brogues. Founded in 1945 by a German army doctor named Klaus Märtens, the origins of Dr. Martens are based in practicality. Märtens designed the original boot to remedy the issues with standard issue army boot, which he found to be uncomfortable after an extended period of wear. The German doctor found that by implementing air cushioning technology in the sole allowed for a much more comfortable ride. Originally the boots did not sell well, but an English shoe manufacturer- R. Griggs Group Ltd saw the potential for the boot in the British market and bought the patent outright in 1959.

After the redirection of the brand to the British market, the R. Griggs group redesigned the boot to have a thicker sole and to be constructed of high quality leather. Further to this they started finishing the sole detailing by stitching it in the now iconic yellow stitching implemented in almost all the boot models today. The boots sold fairly well, but really took off in the 1970’s with the rise of the punk movement. Being rocked by bands such as The Sex Pistols allowed the Dr. Martens to gain traction with men, women and children alike.

This original rise to prominence allowed Dr. Martens to grab hold of the market firmly, collaborating with other major brands and therefore keeping them relevant throughout the different styles that have come and gone since the 70’s. Today Dr. Martens are otherwise known as “Doc Martens” or rather affectionately just “Docs”. This English brand will continue to be recognised as a classic as more era’s of fashion come and go.

Check out our collection of both modern and classic Dr. Martens here.

Here at Stuarts London we pride ourselves on our collection of English heritage brands, be sure to check out our store.