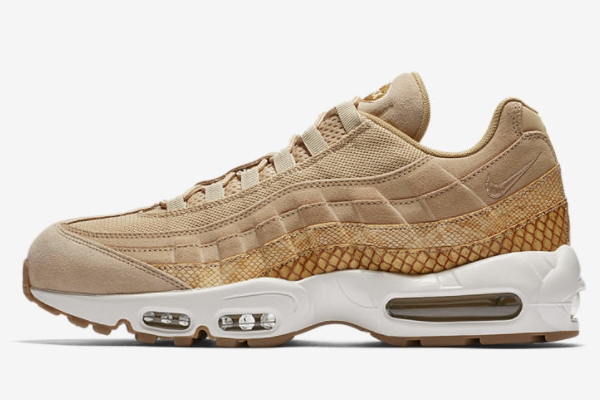 Two of the most popular 90’s Nike Air Max silhouettes make a comeback this week as part of the highly anticipated “Exotic Skins” pack.

Donning a pattern first seen on last season’s exclusive launch of the Summit White Nike Air Max 97 the pack sees the Air Max 90 PRM SE and Air Max 95 PRM SE silhouettes get the snakeskin makeover in time for SS18. Consisting of technical features of what we have come to expect from both iterations catch the eye in a Vachetta Tan and Elemental Gold colourway with the uppers featuring premium suede and faux-reptile panelling. Complimented with a clean white midsoles and perfectly corresponding classic gum outsoles you can get your first look of the AM95 set to drop as part of the pack above.

Scheduled to release online at 08:00 AM on Thursday you can view all of the release information for both models at Stuarts London below. You can subscribe for launch alerts via the button below.