Up Close & Personal with the Human Scales Selvedge Denim Range

The battle for who produces the best Selvedge Denim has well and truly increased over the past couple of years. Even the likes of Sir Alan Sugar has been seen getting in on the act with Japanese Denim recently on the Apprentice. Whereas by his own admission, the theoretical attempt by his candidates was shambolic to denim purists, there is now a trickle of new upcoming brands appearing on our radar. Inspired by the quality of denim being produced in Japan in the recent years, Stuarts has introduced several new brands from the east Asian market such as ‘Still By Hand’ and ‘Human Scales’. Having some years of experience in the market, this Scandinavian brand using some of the finest Japanese denims is one to look out for.

Human Scales themselves was created in 2007 by Swedish designers Mikko Kämäräinen and Peter Ferber. Dedicated to angling and the coastal climate of Scandinavia and with the name inferring that what we wear is part of us, the brand has hit the UK with a storm this season. With high demand for Human Scales Leather Jackets, Corduroy Shirts and alike, our attention is firmly fixed upon the quality selvedge that this brand produces in the infamous Kuroki Denim Mill in Japan.

Being part of a niche cult of brands using Kuroki denim, Tellason also use the Kuroki Mill, a mill world renowned for producing the ultra-premium materials that Human Scales have taken full advantage of. Crafting jeans made using natural Indigo dye, from the Indigofera Tinctoria plant, the fabric is woven on vintage shuttle looms in Okayama. Creating the deep natural Indigo colour takes great skill and attention to detail, the Selvedge is rope dyed which means the yarns are suspended from specialist machines and are dipped into an indigo bath several times. After this process, they are then removed and allowed to dry naturally before the crafting process begins.

This was the first ever piece of apparel made by Human Scales. Named the greatest, because they are well…great, this model is a 14oz Kuroko denim that is featured in a regular fit which slightly tapers at the ankle. To add comfort to these jeans they also feature a higher rise which does not compromise the Greatest silhouette. The final result is a pair of Japanese Selvedge jeans that has made Human Scales the toast of the denim world, whilst providing an authentic, finished look that closely matches what the brand represents. 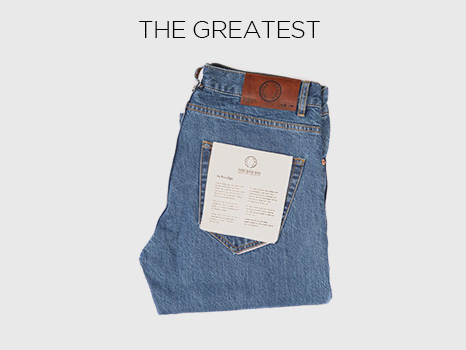 One of the two denim models available at Stuarts, the ‘Incredible’ is made in the same way as the Greatest, however, the Incredible is a 14oz Slim Fit selvedge model which also features a tapered leg. To add to the Incredible finished streamlined look the model also incorporates clever usage of a zip fly. The on-trend aesthetics of these denims make them one to look out for this Christmas. 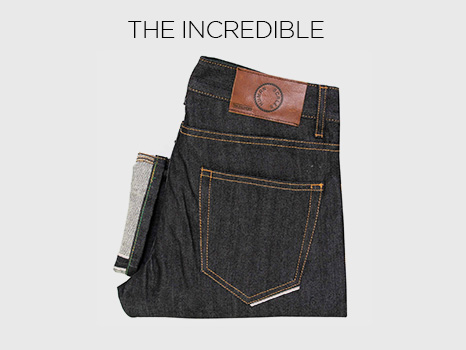 As with all Selvedge denim from Levi’s Vintage to Naked & Famous & Human Scales, remember for optimal results when wearing your Selvedge, wear your raw jeans as long as possible without washing and you will get personal fades that no other pair of can give you. If you need a hand with keeping your jeans fresh we do stock a range of denim protecting products by Mr Black to help you get the best results from your denim. If you want any styling tips of help with your Selvedge Denim then simply drop our customer services team an email and we will always be happy to help.