Nike’s Flyknit Technology Is Now About More Than Just Shoes

WHEN NIKE FIRST released its Flyknit line of shoes, in 2012, it seemed like yet another attempt—albeit, a technologically impressive one—from a sportswear company to cash in the trendy barefoot running trend. Now, it’s a few years later, and most Nike shoes feature the lightweight Flyknit technology including some of its most famous models such as the Nike Air Max 1 Ultra Flyknits  which launched last month. For the last World Cup, the Nike Magista soccer cleat was a Flyknit product. So is the Back to the Future-inspired self-lacing HyperAdapt 1.0 shoe. Flyknit is more than a cornerstone of Nike; it’s now a brand in its own right.

So why is Flyknit now more than just a shoe? Well, we know this because, as of last month, Flyknit even has its own visual identity in the form of a logo, as featured above. It was created for Nike by the London design studio ManvsMachine for Nike’s 2016 Innovation Summit. The Flyknit logo was also unveiled alongside an 80-second, animated promotional film that turns a hallucinogenic, kaleidoscopic lens on the Flyknit technology. 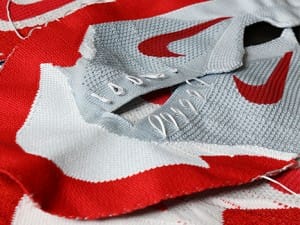 The Flyknit Threads During Manufacturing 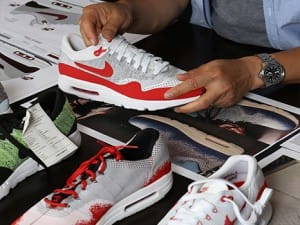 The Finished Flyknit Article After Prosessing

Because Flyknit products are woven together from many, many threads, in order to give the technology the lightweight feel that has made it so popular, ManvsMachine used that motif to create the main graphic components of both the new Flyknit logo and the video. The typeface is an adaptation on Objektiv, a font from Dalton Maag’s foundry that is built according to the golden ratio. ManvsMachine’s spin on it introduces some slight curves, giving it a subtly unspooled look, which is very much in sync with the Nike Flyknight ranges that have been released at Stuarts London thus far.

ManvsMachine created the video in order to allow the designers to give Fantasia-worthy superpowers to a bunch of digitally rendered threads. A purple-and-blue thread loops together into an infinity symbol—the new Flyknit logo—before looping, darting, and weaving around. Watching the graphics is like peering into the manufacturing process through a magnifying glass. The end result is, of course, a Flyknit shoe. But if this snazzy campaign is any indication, Flyknit will soon be in more places than on your feet.

Nike has steadily been introducing their Flyknit Technology to some of the classic trainers. The latest Flyknit product to be launched is the modern revamp of the Nike Air Max 1 Ultra models whilst earlier releases this season saw Flyknit Technology installed into its Presto & Roshe ranges.