VE Day Special: 4 Must Have 2016 Garments That Have A Military Background

This weekend marks the 71st commemoration of VE Day here in the UK & the rest of Europe whilst the 9th of May signals Victory Day in the Russian Federation. VE day is a day for us to congratulate servicemen from all over the world for their achievements in helping to make the world a better place. To pay our gratitude in our own, Stuarts London, way we are taking a look back at some of the greatest garments used by the military from all over the world helping to inspire men’s fashion over the past 71 years. Here are a few of our favourite of the very many styles that have come from the military over the past decades. 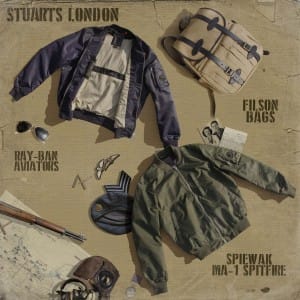 The Bomber Jacket, also known as a flight jacket or bombardier jacket is, without a doubt, one of the key trends emerging throughout spring/ summer 16. In store and online we are seeing many customers purchasing bomber jackets from Schott, Belstaff and Baracuta. We wonder how many of you actually know that this jacket would not have existed if it was not for the military origins in been handed out to pilots. In fact bomber jackets only came about because of open cockpit planes during WW1 causing the U.S. Army to establish an official Aviation Clothing Board in 1917. It was from this point onward that bomber jackets were introduced in a variety of materials ranging from Leather to sheepskin.

The chances are in the UK that the majority of us own and wear a Pea Coat especially throughout the winter months. The Pea Coat has heavy links within naval military with the first known documentation of the Peacoat being in 1720. Originally worn by Dutch Sailors at sea the Pea Coat is characterised by; the short length, broad lapels, double-breasted fronts, often large wooden, metal or plastic buttons, and vertical or slash pockets. Over the centuries, this jacket has the British & U.S Navy’s to thank for its mass popularisation. These are elements that still remain upon such jackets today. 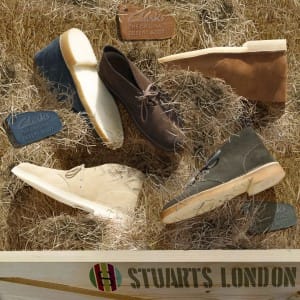 Known as the boot that built an empire Chukka boots are an ankle high leather boot with suede or leather upper soles. Originally coming with upper lacing the term Chukka comes from polo, although the most popular Chukka style, the desert boot, rose to prominence during the Western Campaign in World War 2 and was popularised by off-duty army officers serving in the British Army in Africa throughout the 1950’s. This boot is still a prominent feature amongst men’s fashion today with brands such as Clarks, Astroflex & Fracap all of whom originally supplied various national army’s with footwear over the past several decades.

There are several military cuts to pass through, and still be prominent, within men’s fashion today. The majority of short styles from the Buzz Cut to the Crew Cut all stem from the military but perhaps the most prominent style to have in 2016 is The Regulation Cut or variations of. The Regulation Cut is the haircut of higher ranking military officials, allowing up to two inches of hair on the top of the head allowing the wearer to style as desired, despite being rapidly tapered down the sides and back of the head.

So there we have it. Here are a few of our selected Military Styles out of many that still remain prominent within men’s fashion today.  We owe more than just our freedom to the many servicemen we are recognising this weekend. We also owe them our fashion and for some of the garments that some of us could not live without.