The Harrington Jacket: How This Jacket Became The King Of Cool

To people like me and you when you think of the word “jacket” the image that immediately jumps to our heads is that in the style of a Harrington. Rising to prominence in the 1950’s & 60’s being worn by icons such as  Elvis Presley, Steve McQueen, James Dean & Frank Sinatra, the Harrington Jacket is still a firm staple of most men’s wardrobe and can be regularly seen on some of the UK’s greatest modern day artists from Alex Turner to Daniel Craig.

Like Every True Style Icon, There Is A Begining

Having carried out extensive research into its history, the roots of the Harrington Jacket can be traced back to 1937 and the Miller brothers (John & Issac Miller). Originally commissioned to make rain proof outwear on behalf of Burberry and Aquascutum, the Harrington Jacket itself originally began life in Manchester Baracuta. before the Mills brothers later decided to branch out their own allowing Baracuta to become the name we know as synonymous with Harrington. The style of jacket initially become popular with golfers due to its design meaning it is able to keep the elements out whilst keeping its appearance, before hitting the big time and catching on in the US in the 50’s where the G9 (G standing for Golf) became popular amongst Ivy League students due to its laid-back look.

Some of the G9’s defining characteristics included its famous bright plaid/tartan lining based upon the Fraser tartan design. This tartan feature has been an ever present of the Harrington design and has become a standout symbol of British Fashion internationally. The final finished material will usually be fleece or flannel, with variations, such as mesh, for warmer weather.  Despite the textile composition making the jacket suitable for our ever changing British weather, most Harrington wearers will have more than one depending upon the season. 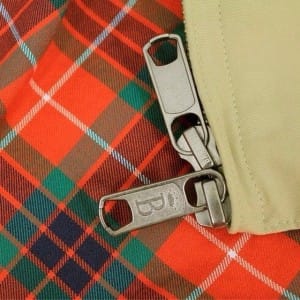 How To Wear Your Harrington?

As always the fit is the first thing top look out for. A classic Harrington’s body will always be cut in relation to the chest size and arms. The elastic hem of the jacket should always cover the belt or waistband of your trousers and the sleeves should be long enough to cover your wrists. The best feature of a Harrington is the fact that it doesn’t require dressing up; in fact, the jacket’s infamy was born out of an effortlessly cool attitude that is historically attached to it since its creation. Therefore, wear your Harrington with a pair of rolled up Selvedge Denim and a buttoned up shirt or jumper of your choice underneath. 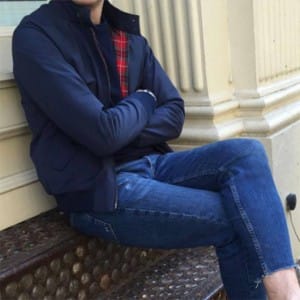 The Harrington jacket is an enduring piece of traditional clothing that has not only weathered the decades but also improved significantly along the way. There simply is not a comparable  jacket for men that is as cleanly understated nor as practical as a Harrington. View our full range of Harrington Jackets here.