The Schott brand has been around for a while, 100 years, to be precise. In recent years, however, the label has sunk below the radar.

Schott was last a strong presence in the UK in the late 90s and early 2000s, famed more for the velux, neoprene hoodies adoring the backs of suburban youth than for the motorcycle and military jackets on which it built its name. By its own admission, the brand had devalued itself. Much like Burberry, it’d become too accessible, which may’ve helped profits in the short-term but, ultimately, had a negative impact on the image of brand from the point of view of the discerning, style-conscious buyer (like yourself) looking for an aspirational name to buy in to.

As well as the overexposure, what also failed to help was the Schott label being adopted by schoolboys, desperate to impress their colleagues with the latest ‘in’ label. Like the contemporary Kickers brand, this adoption by hormonal teens sounded a death knell for Schott’s cool leading it to become, eventually, the uniform of choice for the Crimewatch brigade.

Burberry shook off the down market image it acquired, withdrawing the check from the European market and repositioning itself away from the Daniella Westbrooks of this world and reemerging as one of the coolest brands not just in the UK but on the planet. It did this by going back to its roots and building on its reputation for impeccable tailoring and a unique, British style.

Schott has been diligently doing a bit of rebranding themselves, and its star is back on the ascendant, and rightly so. This is a brand that celebrates its centenary year this year, and for most of it’s 100-year history it’s been “THE motorcycle jacket brand”, creating iconic garments such as the Perfecto, which was released in 1928 and was the world’s first motorcycle leather, and the 613, as sported by Marlon Brando in the 1953 film The Wild One. Schott was also, interestingly, the first brand ever to use a zip in a jacket.

It’s focusing now on those core products, those classic jackets on which it built its name and its fortune. Jackets like the  Easy Rider and Perfecto jackets, which beautifully capture the brand’s heritage, harking back to the 50s and 60s and the halcyon days of motorcycling. The A2-184SM and 740N peacoat, crafted especially for US Marines, which celebrates the links Schott forged with the US military during World War II.

This isn’t to say that there the company is resting on its laurels completely. No brand can rely solely on its heritage alone. This is as true outside of fashion as it is in it; luxury brands like Jaguar, Land Rover and Cadillac have all shook things up over recent years, recognising that they have to build on their brands core values whilst injecting a healthy dose of the contemporary to stay relevant.

Schott are doing this too. They’ve collaborated with streetwear brands that don’t have to chase anyone to be considered cool, like Mr Bathing Ape and Supreme. They’ve also worked with Jeremy Scott, whose tie-ups with Adidas have become the stuff of legend. The Schott/Scott collaboration used prints by the late, great Keith Haring, a celebrated New York graffiti artist whose work continues to receive acclaim 23 years after his death.

The label also collaborated with Parisian brand American College, bringing the Schott name and authentic US feel to a slightly more affordable product, the MA1. 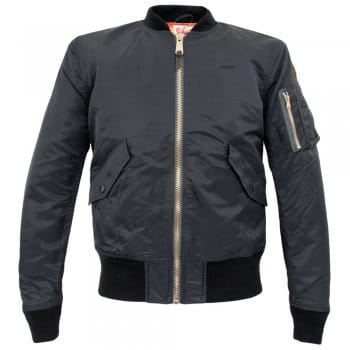 Schott are celebrating their history and not just through the clothes. They’ve released a gorgeous hardback book detailing the history of the label. It’s written by talented heritage historian Rin Tanaka and charts the brand from its infancy to the present day and is lavishly illustrated with original sketches and previously unseen photographs.

Schott isn’t chasing fashion anymore. It’s evolving in a way that it’s comfortable with, and setting its own agenda. It’s a fashion brand that isn’t fashion-led which, in a world full of brands just aching to be the next big thing, is incredibly refreshing.