The Launch of the iPad HD 3 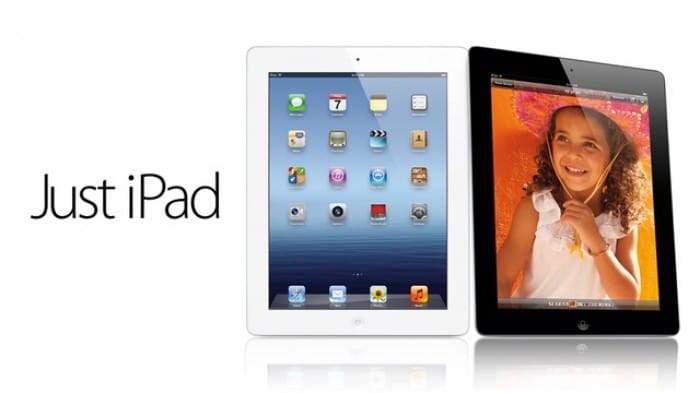 The rumour mill has gone into overdrive ahead of with the launch of a new iPad today – with the latest leaks suggesting that a new model of Apple TV might pop up. A new, HD compatible version of Apple TV will be on show at the event, powered by an upgraded A5X chip to deal with HD video. The rumour would square with reports claiming that the new iPad will have a sharper HD screen – if Apple starts offering hi-def video via iTunes store, it would make sense to upgrade its set-top TV box too. 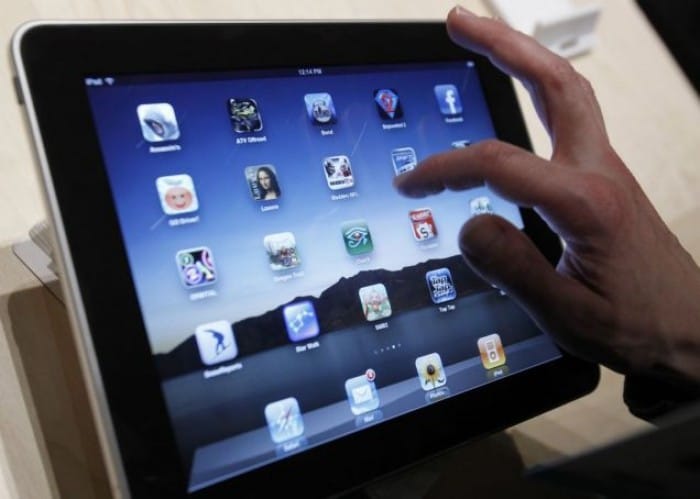 Citing unnamed sources in Apple’s supply chain, the tech site said, ‘In addition to iPad 3, Apple is also expected to unveil an 8GB iPad 2, allowing the tablet PC series to cover different segments and to defend against Windows 8-based tablet PCs, the sources noted.’ Apple had sold more than 55 million iPads around the world as of January this year. Search data company Experian Hitwise says that one in 2000 of ALL internet searches have been for terms related to iPad 3 over the past week. 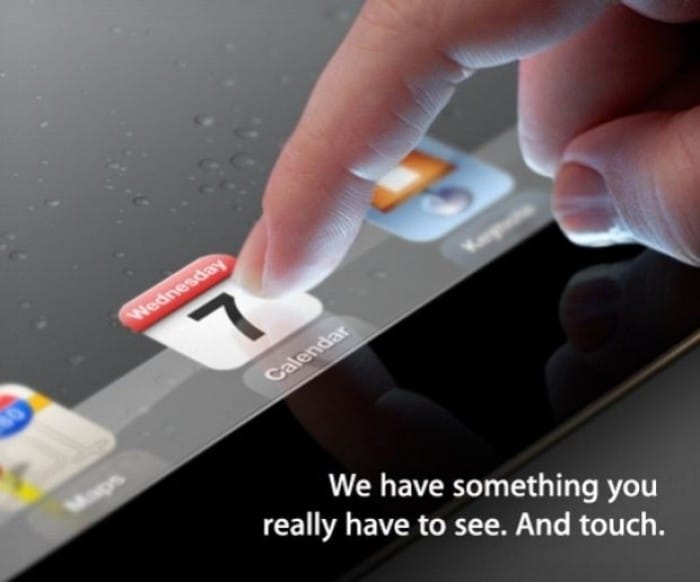 Some industry experts are even predicting the end of personal computers as touch-screen tablet-style computers grow in popularity. Apple announced that more than 25 billion apps have been downloaded from its App Store by customers. Nate Lanxon, editor of technology site Wired.co.uk, said he expected the latest iPad model to ‘look a lot like the current model’ but with a much higher resolution screen. 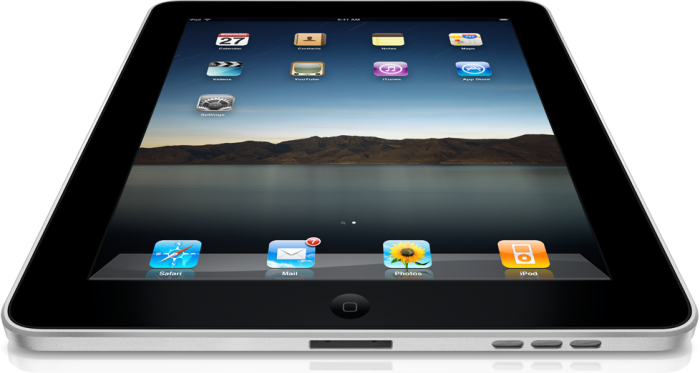 The sheet lists a number of colour options for an ‘IntelliCase for iPad HD (3)’.Since the new Apple tablet is expected to come with a much higher resolution (2,048 x 1,536 pixels), naming it the iPad HD would make sense. It will apparently boast a Retina Display with twice the current generation’s resolution and a greater pixel density than a full 1080p HD TV. The screen is thought to be the same size as the iPad 2, and since one of the listings for a case on the inventory sheet gives an option for ‘iPad 2 / HD (3)’, this would appear to confirm this thinking. 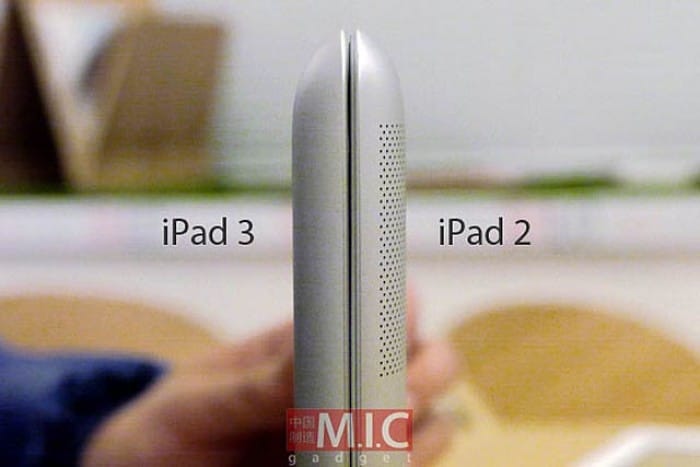 Apple are holding a press event in San Francisco on Wednesday March 7, where it is expected the company’s CEO Tim Cook will unveil the new iPad to the world. The screen on the new 9.7in iPad features 3.1million pixels – over one million more than an HD TV – with the tablet possessing the new Apple A5X chip with Quad Core graphics. The tablet also comes with a 5megapxel iSight camera, capable of 1080p HD video. The new iPad, which has yet be confirmed as the ‘iPad 3’ or ‘iPad HD’ will go on sale from March 16, with pre-orders already being taken. 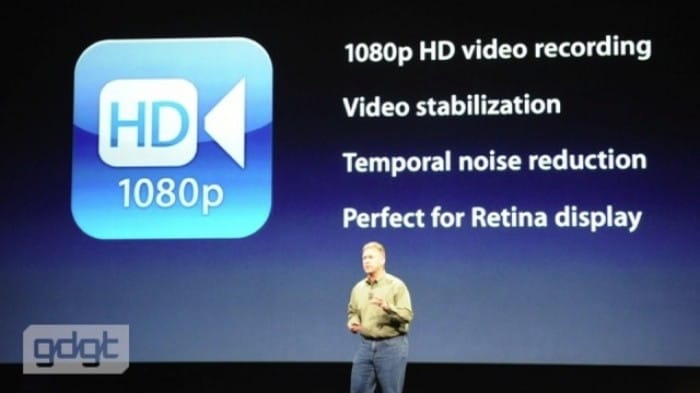 It’s extremely unlikely that anything other than a superfast new A6 chip will power the iPad 3. The main question at this point seems to be whether that A6 will pack quad core power. On one hand, competitors like the Transformer Prime have moved on to quad core chips, and the incredible gaming and HD movie processing heft that upgrade entails. But for what it’s worth, Apple has shown in the past that it’s willing to stand pat if it feels a spec is more than good enough for the next generation, like it did with the iPad 2′s 512MB of RAM.

Speaking of RAM, if we’re going to take the retina display rumours seriously, it would make sense that the RAM would finally see an upgrade in the iPad 3. The iPad 2′s 512MB, like the iPhone 4S’s, was buffered by the symbiotic relationship between software and hardware. But it stands to reason that the brute force required to push the massive number of pixels a 10-inch retina display would require a memory upgrade. File that under pure speculation.

iLounge cited several sources saying the iPad 3 will have an HD front-facing camera for HD Facetime. This would make a lot of sense, considering that quality front-facing cameras have found their way into phones like the Lumia 900, and people use their tablets for video chat much more than their phones. File that under pure speculation. 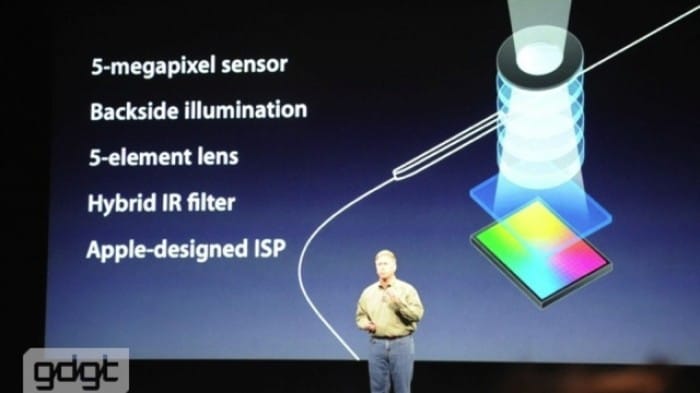 iOS 6 is still a long way off, but the iPad 3′s software warrants a quick mention because it might be the first non-iPhone 4S Apple product to get Siri, as some details in the iOS 5.1 beta reference the iPad in Siri Dictation.

It’s essentially guaranteed that the iPad 3 will come loaded with iOS 5.1, beta versions of which have been available to developers for some time. So far, the upgrade to iOS 5 offers nothing much new. But seeing as the developer version of iOS has gone virtually unchanged over the past several versions, which would suggest it’s ready to go public, some speculate that Apple has a secret big feature in store for the release of the iPad 3. Whatever could that be?…

Update: In the same report that revealed the probable iPad 3 screen resolution, Ars also reports that the curious iPads in their analytics also used “iOS 6.” Considering that iOS 5 launched relatively recently, it still seems likely that the next iPad will ship with iOS 5.1 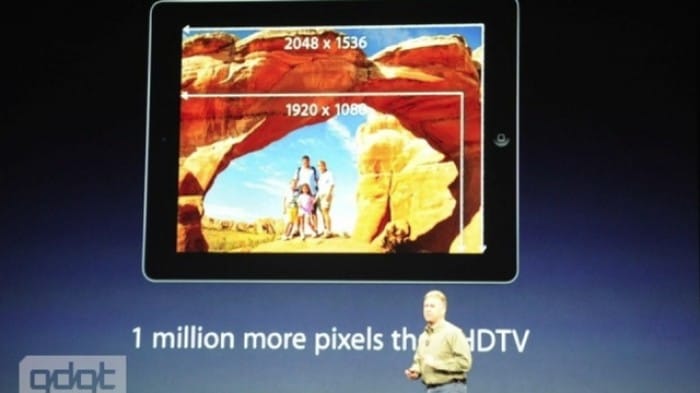 Commenting on the product, Philip Schiller, Apple’s senior vice president of Worldwide Marketing, said: ‘The new iPad redefines the category Apple created less than two years ago, delivering the most amazing experience people have ever had with technology. ‘The new iPad now has the highest resolution display ever seen on a mobile device with 3.1million pixels, delivering razor sharp text and unbelievable detail in photos and videos. The ‘retina display’ delivers four times the number of pixels as the iPad 2, which according to Apple is ‘so dense that the human eye is unable to distinguish individual pixels when held at a normal distance, making web pages, text, images and video look incredibly sharp and realistic’. The new iPad will go on sale from £399 (16GB), £479 (32GB) and £559 (64GB) for Wi-Fi-only models. 4G models will be available for a suggested retail price of £499, £579 and £659