Puma AG Rudolf Dassler Sport, officially branded as PUMA, is a major German company that produces high-end athletic shoes, lifestyle footwear and other sportswear. Formed in 1924 as Gebrüder Dassler Schuhfabrik by Adolf and Rudolf Dassler, relationships between the two brothers deteriorated until the two agreed to split in 1948, forming two separate entities, Adidas and Puma. The company is known for its football shoes and has sponsored acclaimed footballers, including Pelé, Johan Cruyff, Diego Maradona, and many more. Puma is also the sponsor of the Jamaican track athlete Usain Bolt. 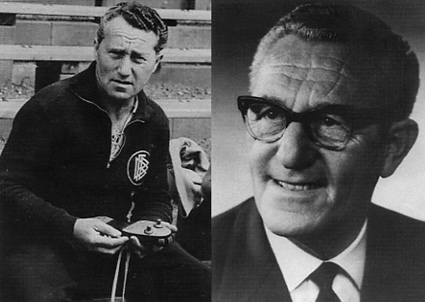 Christopher Dassler was a worker in a shoe factory, while his wife Pauline ran a small laundry Their son Rudolf Dassler, joined his father at the shoe factory, and was then called up to fight in World War 1. Upon his return, Rudolf received a management position at a porcelain factory, and later in a leather wholesale business in Nuremberg. After tiring of working for others and away from home, Rudolf returned in 1924 to join his younger brother Adolf nicknamed Adi, who had his own shoe factory. The pair started their venture in their mother’s laundry but at the time, electricity supplies in the town were unreliable, and the brothers sometimes had to use pedal power from a stationary bicycle to run their equipment. By the 1936 Summer Olympics Adi Dassler drove from Bavaria to the Olympic village with a suitcase full of spikes and persuaded United States sprinter Jesse Owens to use them, the first sponsorship for an African American.

After Owens won four gold medals, his success cemented the good reputation of Dassler shoes among the world’s most famous sportsmen. Letters from around the world landed on the brothers’ desks, and the trainers of other national teams were all interested in their shoes. Both brothers joined the Nazi Party, but Rudolf was slightly closer to the party. During the war, a growing rift between the pair reached a breaking point after an Allied bomb attack in 1943. After Rudolf was later picked up by American soldiers and accused of being a member of the Waffen SS, he was convinced that his brother had turned him in. In 1948, the brothers split their business. Rudolf  left to start his own company. It was from this split that Adolf started his own sportswear company with the name he formed using his nickname ‘Adi’ and the first three letters of his last name ‘Das’, to establish Adidas. Rudolf created a new firm that he called Ruda – from ‘Ru’ in Rudolf and ‘Da’ in Dassler. Rudolf’s company would later change its name to Puma in 1948.

The brothers earlier split led to a divided town. Brand loyalty became supreme for residents; several stores, bakeries and bars were unofficially known as either loyal to Rudolf’s Puma, or to Adolf’s Adidas. Even the town’s two football clubs were also divided: AVS Herzogenaurach club supported the three stripes, while  FC Herzogenaurach endorsed Rudolf’s footwear. When handymen were called to Rudolf’s home, they would wear Adidas shoes deliberately so that when Rudolf would see their footwear, he would tell them to go to the basement and pick out a pair of free Puma shoes. The two brothers never reconciled, and although both are buried in the same cemetery they are spaced apart as far as possible. Following the split, Puma and Adidas initiated a fierce and bitter rivalry with each other. The enmity split the town into two, leading to the nickname ‘the town of bent necks’ people looked down to see which shoes strangers wore. 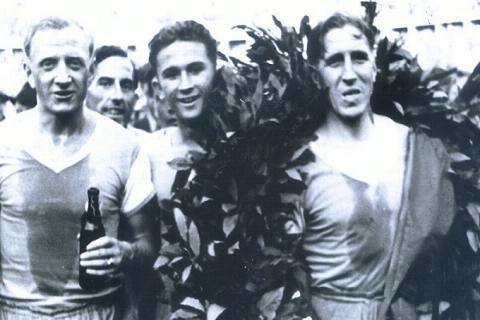 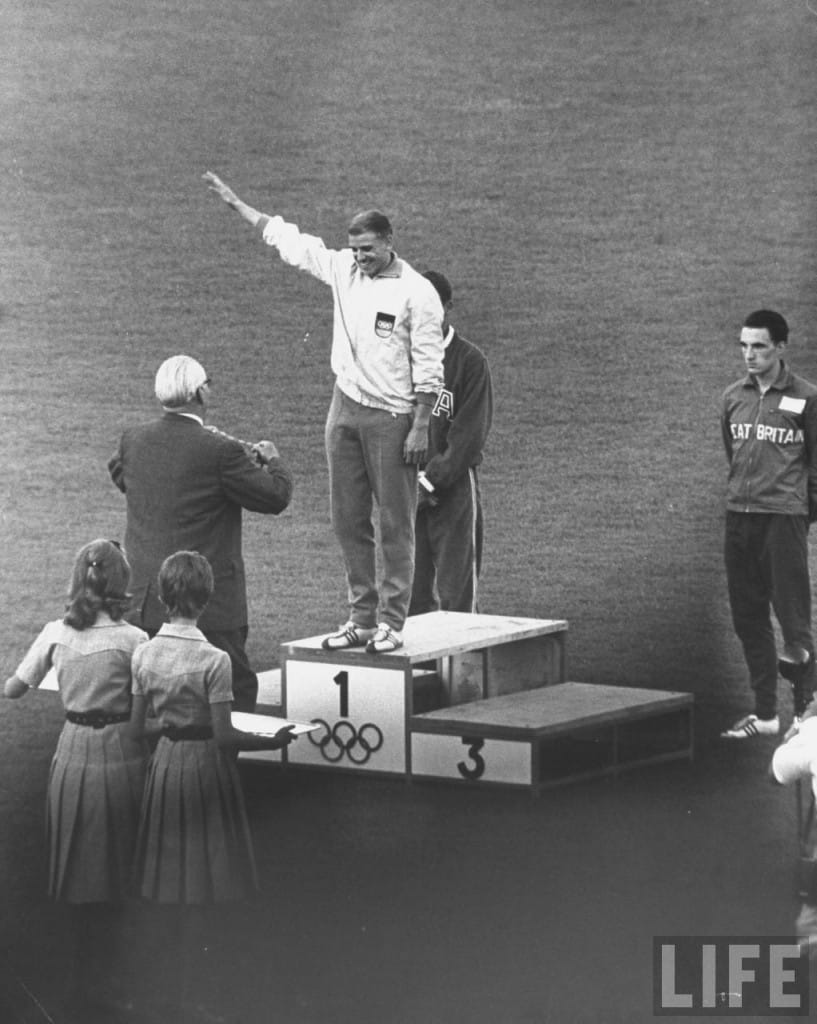 At the 1960 Summer Olympics Puma paid German sprinter Armin Hary to wear Pumas in the 100 metres sprint final. Hary had worn Adidas before and asked Adolf for payment, but Adidas rejected this request. The German won gold in Pumas, but then laced up Adidas for the medals ceremony – to the shock of the two Dassler brothers. Hary hoped to cash in from both with the trick, but Adi was so enraged he banned the Olympic champion. Following the split from his brother, Rudolf Dassler originally registered the new-established company as Ruda, but later changed to Puma. Puma’s earliest logo consisted of a square and beast jumping through a D, which was registered, along with the company’s name, in 1948. Puma’s shoe designs feature the distinctive Formstripe with clothing and other products having the logo printed on them. 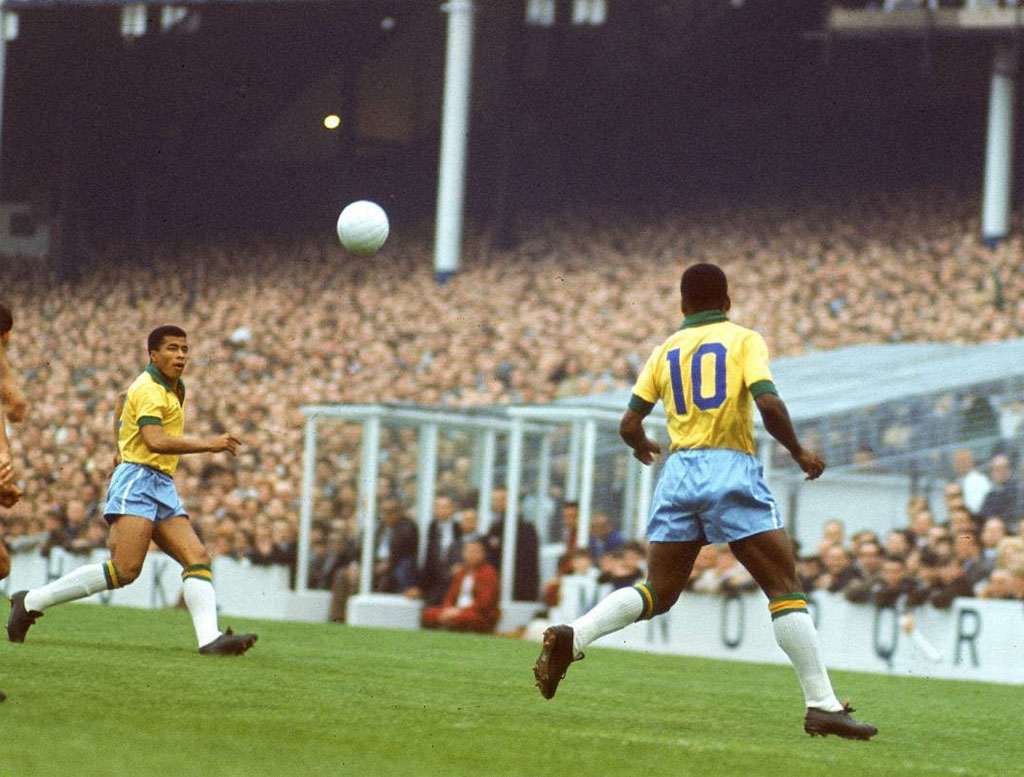 A few months prior to the 1970 FIFA World Cup, Armin Dassler and his cousin, , sealed an agreement which was dubbed “The Pelé pact”. This agreement dictated that Pelé, a Brazilian  midfielder, would be out of bounds for both Adidas and Puma. However, Armin found the potential financial and marketing advantage of sponsoring the superstar irresistible. Pelé complied with a request by Puma’s representative to increase the awareness and profile of the German sports shoe company after he paid to wear the Formstripes.  At the opening whistle of a 1970 World Cup finals match, Pelé stopped the referee with a last-second request to tie his shoelaces before kneeling down to give millions of television viewers a close-up of his Puma’s. This greatly outraged Horst Dassler and future peace agreements were called off. 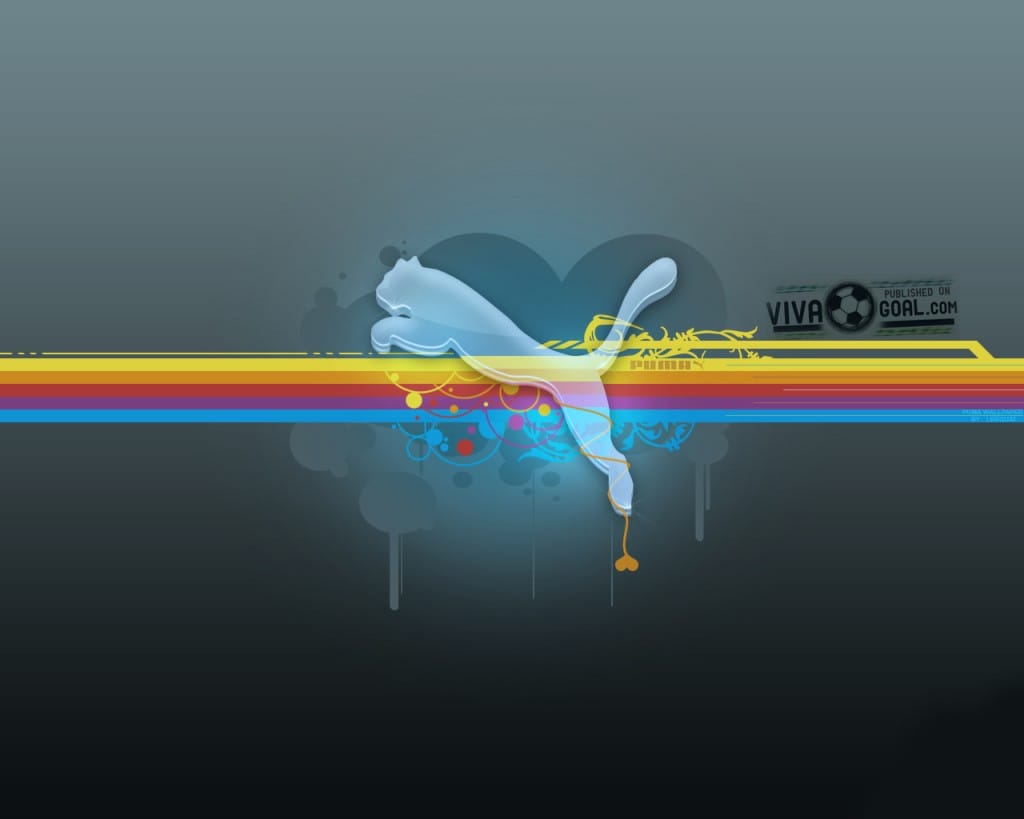 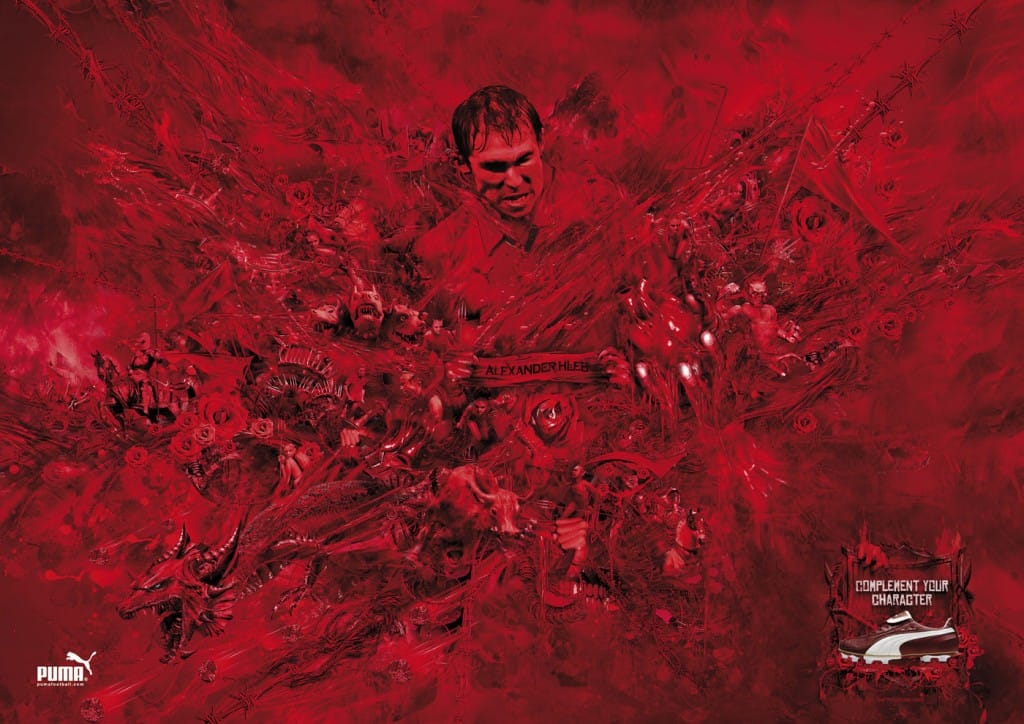 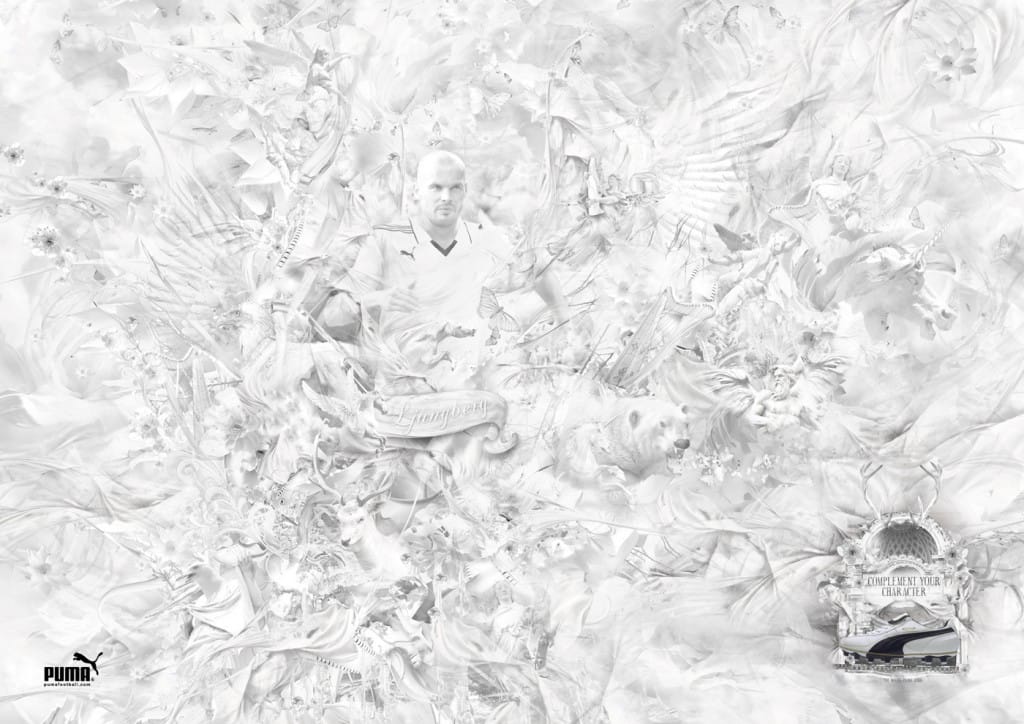 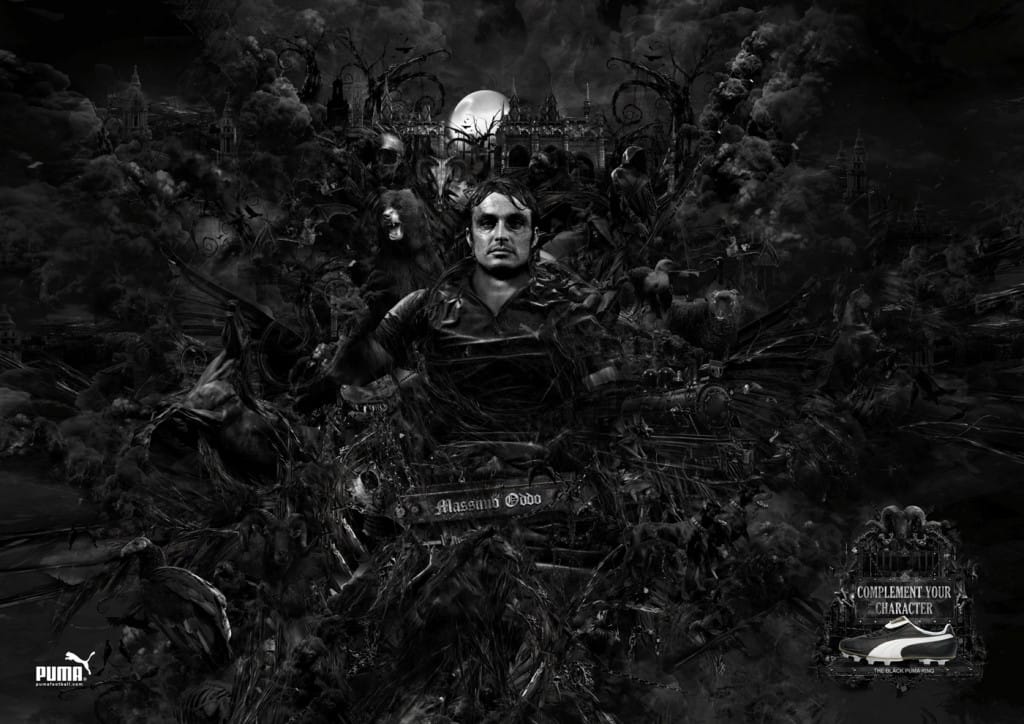 In 1974, Rudolph Dassler died of lung cancer and passed his legacy onto his son Armin. Armin introduced some new ranges to their ever growing library of designs, including Puma Duoflex soles. In 1985, Boris Becker wore Puma clothing, shoes and tennis racket at the Wimbledon and won. Puma’s success continued through to the present day. It is still a very popular brand with football players and fans alike. Collectors of the brand are mainly outside the US and fans of the break dancing era. There are many styles to Puma’s vast catalogue of designs and are among vintage collectors’ favourite choice in sportswear. Puma’s history resonates with the echoes of great athletes and legendary performances, their shoes, trainers and clothing all help bring contenders closer to their goals.

Puma has appointed Professor Green as its first “social ambassador”, in a role that will set the UK rap star to work on the sport brand’s press, retail and social media campaigns.

Puma RS1 New Navy Shoe: Towards the end of 2010, rumours started surfacing that the 80′s era Puma RS1 would be returning the shoe game as part of the 2011 Spring Collection. The shoes rock an upper comprised of a mixture of both suede and mesh utilizing different shades of navy and royal blue accented by white and grey. A sharp relic of the 60s this eye-catching, low cut shoe, it was first seen in 1968, created to honour the Italian team and its success in the European Championship, also held in Italy. The new version has been slightly reworked, offering up a blue and yellow leather upper, a suede toe piece, rubber mudguard and some nice vintage detailing.  £59.99 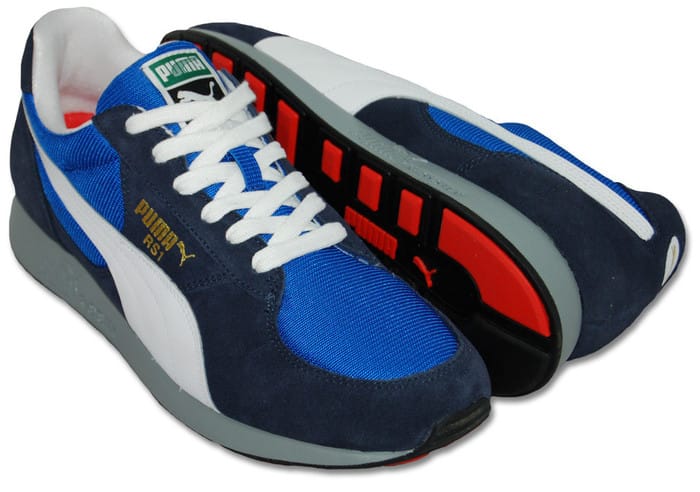 Puma Roma 68 Vintage Introduced back in 1968, the Puma Roma 68 was designed to honour the National Italian Football Team winning the European Cup in 1968. For 2010 PUMA have re-worked it and have given us this vintage version with a spectra blue and yellow leather upper and has a suede toe piece, a rubber mudguard and an embroidered Puma logo on the tongue finished off with a rubber herringbone design sole. £49.99