What goes around comes around – by Sanyika Odieté

There’s a new Blogger in town, and Sanyika is our man on the road. Having a look at what’s going on out and about on the streets of London – Sanyika Reports

It’s a well established fact in the world of fashion that what goes around comes around and this is certainly the case with the vibram soled brogue by Grenson. This well loved shoe has a strong history of over two centuries as it has been worn in many ways by many types and its latest style revival is making it one of the hottest shoes on the streets today. 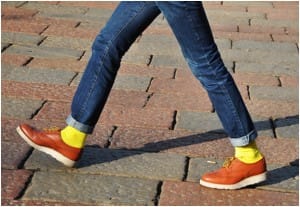 Instantly recognisable with its classic punch detailing and thick rubber vibram sole the leather Grenson can now be seen on the feet of fashions cognoscente throughout East London. Shoreditch and Hoxton are brimming with jauntily attired artistes wearing their beloved brogues with eye catching Burlington socks, skinny Levi jeans, statement t-shirts, iconic Barbour International / Barbour Heritage jackets and their low slung well packed Brady bags. This dandy look remixes brands of the past to give them a modern edge and very current footprint (pun intended!) on the classic brogue.

Ellesse has just been unpacked and placed on the shop floor. Great styles to select from.

Created in 1959 by Leonado Servadio’s need to obtain the perfect ski-wear Ellesse was one of the first brands to explore the concept of combining high performance sportswear with stylish fashion. By the early 1980’s having established itself as a name on the ski slopes of Europe the now global brand seeped its way into the tennis market and was worn on court by top ranking players such Boris Becker and Guillermo Vilas. Appearing on the world stage alongside brands such as Fila and Sergio Tacchini which had already made names for themselves amongst the travelling football Casuals, Ellesse was the perfect brand to complete the zeitgeist trilogy. 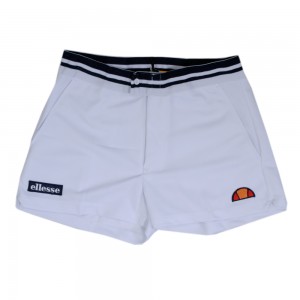 Although hugely popular the then hefty price tags of the Italian label meant few Casuals could afford to buy such an elite brand at a time of economic recession making it even more desirable to teenagers both on and off the terraces. At the peak of its time purchasing an Ellesse jacket would have consumed the bulk of your typical Casuals monthly salary so owning such an item was something one could only aspire to buy one day in the future. 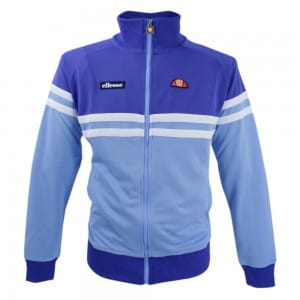 With the release of recent cult films such as Nick Love’s The Firm and The Business there has been a nostalgic resurrection of many of the 1980’s luxury sporting labels as the apparel plays such a major role in recreating this well loved era. Having struck a chord with audiences across the UK who viewed the clothing as characters in their own right within the films, Ellesse and its counterparts have gone back to basics and re-released some of their classic pieces once again.

The long awaited Ellesse Heritage collection is strongly influenced by its retro roots with the new line featuring iconic items such as the visibly branded zip up tracksuit jackets, traditional tennis shorts and the iconic piquet polo shirts in numerous colour ways. These stand out pieces are all favourites of the football Casual and at last are obtainable to those who have hankered after the legendary label for so long.