The T-shirt evolved from undergarments used in the 19th century T-shirts, as a slip-on garment without buttons, originally became popular in the United States when they were issued by the U.S. Navy. Named the T-shirt due to the shape of the garment’s outline, they soon became popular as a bottom layer of clothing for workers in various industries, including agriculture. The T-shirt was easily fitted, easily cleaned, and inexpensive, and for this reason it became the shirt of choice for young boys (perhaps more the choice of their mothers than of the boys themselves). Boys’ shirts were made in various colors and patterns

Following World War II it became common to see veterans wearing their uniform trousers with their T-shirts as casual clothing, and they became even more popular after Marlon Brando wore one and it  finally achieving status as fashionable, stand-alone, outer-wear garments. 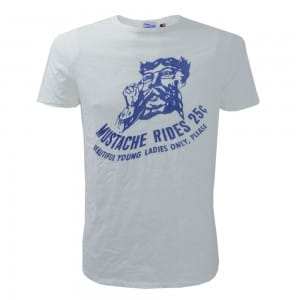 T-shirts featuring images of Cesar Chavez, political cartoons, and other cultural icons in an article in the Los Angelas Times magazine in late 1969. Today, many notable and memorable T-shirts produced in the 1970s have now become ensconced in pop culture.

Every person, sometime, somewhere has had A T-SHIRT! No wardrobe would ever be without one in possibly every colour, plain, patterned, logo, v neck, round neck and to be honest however you want them!

So here we have the iconic 80’s Casuals 80s Casuals T-Shirt, we have such a great selection that the choice is mouth-watering! 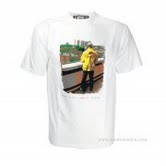 Printed Graphics at the front