For Spring/Summer 2011, Dockers® has dug dip into its extensive archive to develop a capsule range of Limited Edition pants and military style tops for its discerning male consumer. The second in the Dockers® K-1 – Made in San Francisco – series pays homage to the US soldiers serving in the South Pacific, its islands and the Far East during WWII. 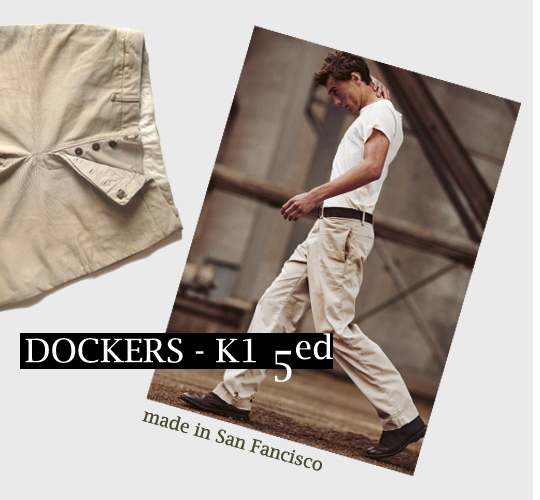 The Dockers® K-1 – Made in San Francisco – Khaki pant takes on all of the design details of the original U.S. Army Khaki pant produced during the early 1940s, only with slight alterations to make it more relevant to the modern consumer.

The second in the Dockers® K-1 – Made in San Francisco – series and the last in the brands limited edition range, this Khaki pant package brings the highly successful seasonal capsule collection to a close after a lucrative 12 months which saw the Dockers® brand in such stores as Collette (Paris), Isoleé (Madrid), 14oz (Berlin), American Classics (London), Clinic (Antwerp) and Gasoline Alley (Munich). Originally produced following the demand for Khaki on the catwalk in 2008, Fashion Week reviews this month continue to forecast the trend for Khaki during Spring/Summer 2010 and beyond as all things WWII dominate the High Street.

“Khaki continues to dominate the catwalk season upon season,” say Angelo Ng, Dockers® Brand Director. “As a result the demand for Dockers® K-1 – Made in San Francisco – Khaki pant continues to grow with each limited edition. The image of the brand has benefited from sales in pinnacle doors and has opened up to a younger trend receptive brand consumer. Dockers® ownership of the Khaki pant category has never been stronger”.

The second Dockers® K-1 – Made in San Francisco – Khaki pant is a regular straight cut fit in a Cramerton Heavy Twill finish. It is significant in its design detailing; one back button pocket, strengthened belt loops – for added protection when under fire, zinc bronze metal button fly fastening and heavy duty plain plastic button fly’s (the original used a’13 star’ black metal).

The war in the Pacific Theater began as a conflict between the Empire of Japan and the Republic of China in 1937, however by December 1941, it became part of the greater World War II, and lasted until August 14, 1945. The most decisive attacks in the region took place after Japan attacked various countries, most notably the U.S with the bombing of Pearl Harbor. The war culminated in the atomic bombings of Hiroshima and Nagasaki by the United States, resulting in Victory of Japan Day and the end of World War II on August 15, 1945. It was one of the bloodiest of all the WWII conflicts.

Four organized U.S. reserve divisions served in the Pacific during WWII, three of which saw action. Among the most important of the U.S. Army’s innovations during WWII was the use of fatigue clothing as hot-weather combat dress. The first pants designed and worn in this series was the ‘M41’ HBT in a Herring Bone Twill. The material – a variation on the Cramerton cloth used in earlier battle dress – was lightweight, tough and hardwearing. Developed by the textile firm Galey & Lord in 1931, it was the most common uniform worn by American soldiers in the Pacific Theater conflict.